“Looking at the Savoir-Faire catalog, I realized how many of the Savoir-Faire products I use and love! Sennelier Paints: watercolor, oil, acrylic, and Egg Tempera! Sennelier soft pastels, Lascaux acrylics, and the wonderful Fabriano papers. I have all the Cretacolor versions of pencils and my favorite brushes are in the Isabey and Raphael lines. I am a colorist - I work in all mediums but the thing that is connected across the board is the way I use color for expression. I keep using Savoir-Faire products because they are exceptional in color intensity and quality. I especially like the creamy textures in the oils and acrylics, and the depth of pigment in all their paints. The watercolors are strong and luminous; they flow beautifully and make juicy washes! A color I can’t live without is Chinese Orange. I recently did a painting using three of the Sennelier Naples Yellows, and mixed them with Viridian and Turquoise and Ultramarine for some amazing soft colors.”

Cathy Carey was educated at the Corcoran School of Art in Washington DC, and received a BFA in Painting and Printmaking from Virginia Commonwealth University in Richmond, Virginia. Several years later Carey moved to Southern California and continued painting, and started a business in graphic design and illustration. Cathy Carey’s paintings can be seen at Arroyo Gallery in Santa Fe, NM and Telluride, CO, and in many private collections world-wide. 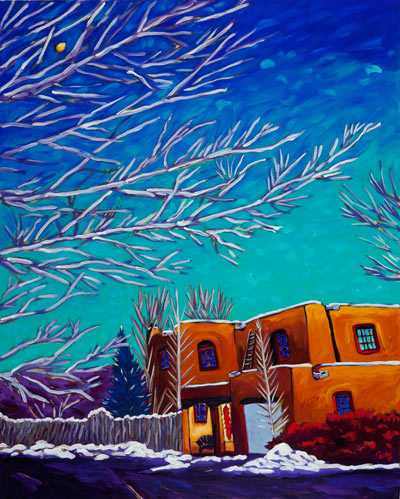