“Sennelier Extra Fine Oils are very buttery and I especially love Turner Yellow & India Yellow-Orange. They are key colors in my landscapes paintings because of their rich pigment. Adding these colors along with the Cadmiums and Sap Green gives me a great variety in my trees.”

Paul Kratter attended the College of San Mateo, where he got a degree in graphic arts. He spent four years at the Art Center College of Design in Pasadena, CA, graduating with a BA degree in illustration in 1980. He was fortunate to make a living mainly in advertising, which included a long relationship with the National Football League and various major league baseball clubs. During the latter part of his career he concentrated solely on wildlife illustration. He worked for a variety of zoos, The Nature Company, a museum in Alaska and also worked on several children’s books including “The Living Rainforest,” an award winner in Communication Arts’ annual. In 2002 he was bitten by the plein air bug and started painting in the East Bay hills near his home. He participates in a number of plein air events annually in California. 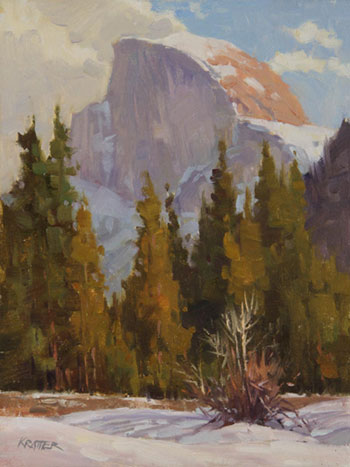