“I have been using Fabriano Artistico traditional cold pressed 140lb and 300lb paper for the past nine years and consider it my paper of choice. As an international watercolor workshop instructor, I have the opportunity to share my recommendations and experiences with thousands of watercolor artists every year through my website, newsletters, and workshops. I consistently recommend Fabriano Artistico paper because of its velvety texture, which accepts paint beautifully, and its forgiving nature. The surface of the paper has just enough tooth to create beautiful dry brush effects but is also smooth enough to paint fine lines and detail.”

Sterling Edwards is a contemporary watermedia master and photographer from Kansas City, Missouri. He has been featured in numerous newspaper articles nationwide, including the fall 2001 issue of Watercolor Magic Magazine, in an article titled “Ones to watch.” In 2007 he was awarded signature member status in the Canadian Society of Painters in Watercolour, an international organization based in Toronto. He is a co-founder of the Rusty Nail Painters. In 2010 he was awarded signature membership status in the esteemed Transparent Watercolor Society of America. That same year he was selected as a featured artist in the book, “Best of America Watermedia Artists” published by Kennedy Publishing Company. In 2013 Sterling was accepted into the newly established International Watercolor Society. His award winning watermedia paintings are in private and corporate collections throughout the world and he is represented by several galleries in the U.S and Canada. 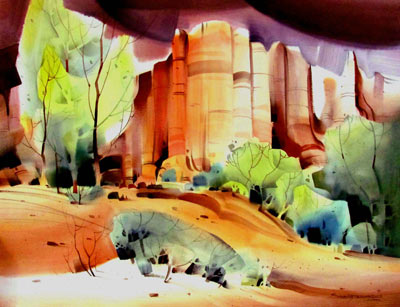